It was on September 28, a date which marked the sixth anniversary of the Umbrella Movement, that we sat down with weary-eyed Joshua Wong. Though not arrested for breaching the National Security Law, he was due to appear in Eastern Magistrates』 Courts for allegedly taking part in an unauthorized assembly and violating the Prohibition on Face Covering Regulation.

『Will I be denied bail by the court?』 asked Wong on his Facebook page the night he was charged. It would be unprecedented, but no one really had a crystal ball. 『Never say never,』 he stated. Later, he would be released by the court on bail.

Soon, however, he would find himself at West Kowloon Magistrates』 Courts on 23 November, this time to face charges for surrounding the Police Headquarters during the anti-extradition bill movement. The trio of Wong, Agnes Chow and Ivan Lam pleaded guilty and were remanded in custody until their sentencing today (December 2). 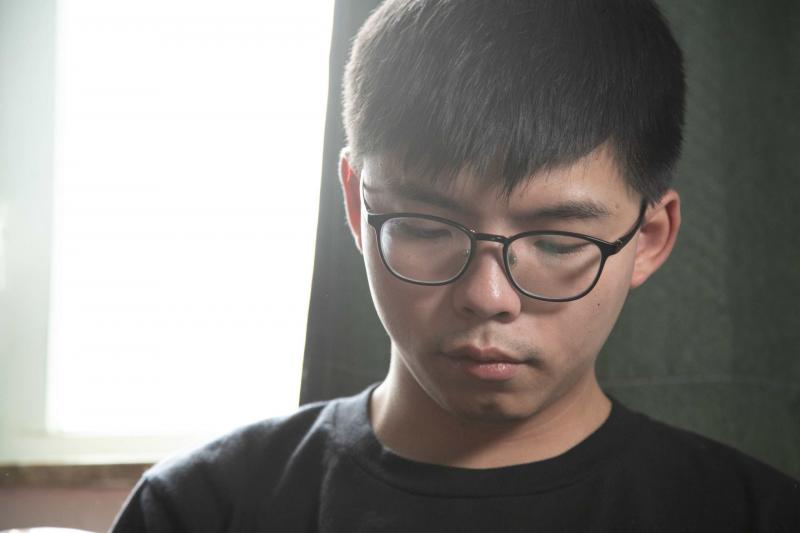 Joshua Wong speaks at a softer pace than in our last meeting in May, albeit with the same signature logic and rationality

An arrest that could come any time

Our earlier interview with Joshua Wong in May came at a time Hong Kong was at a standstill due to the outbreak of Wuhan pneumonia. He had yet to announce his running in the Legislative Council elections, but was evidently in high spirits and burning with ambition.

This time, Wong texted us before our appointment saying he was early and would chill out by himself. The moment he sat down, he started beaming out replies on his phone, in typical frenzy. We decided to make way so that he could enjoy some me time, only to find him asleep 15 minutes later, corners of his mouth quirked up – a hallmark of a good man, as legend has it. This guy can’t possibly be bad – just naive, if you like.

A month after the National Security Law was passed, the arrests that started in the early hours of October 8 included close ally Agnes Chow, a move that caught Wong by surprise.

‘Of course I was worried. The arrests went from morning till night, ending with a press conference by the National Security Department of the Police at 9:30pm. When I saw I wasn’t among those rounded up, there was a sigh of relief. It’s a whole different game if you were arrested for breaching national security, and with it the amount of pressure.’

He was seriously concerned about Chow. ‘I was thinking about how she could be bailed – or will it be denied?’ Eventually, some 24 hours later, Chow was released to the relief of Wong and another running mate Tiffany Yuen, who had long been waiting at Tai Po Police Station.

Chow’s arrest is something Wong still fails to understand to this day.

『I thought about getting arrested that day, but I still don’t get why Chow was arrested. The police said she was a core member of the “Fight for Freedom, Stand with Hong Kong” group (known as ‘I want laam caau’ in Cantonese), but they were not acquainted at all. It was totally irrelevant. Perhaps wrong (police) intelligence had them thinking Chow was the boss behind it all – but it just didn’t make any sense.』 Yet, it was a scary and unsettling experience to her. 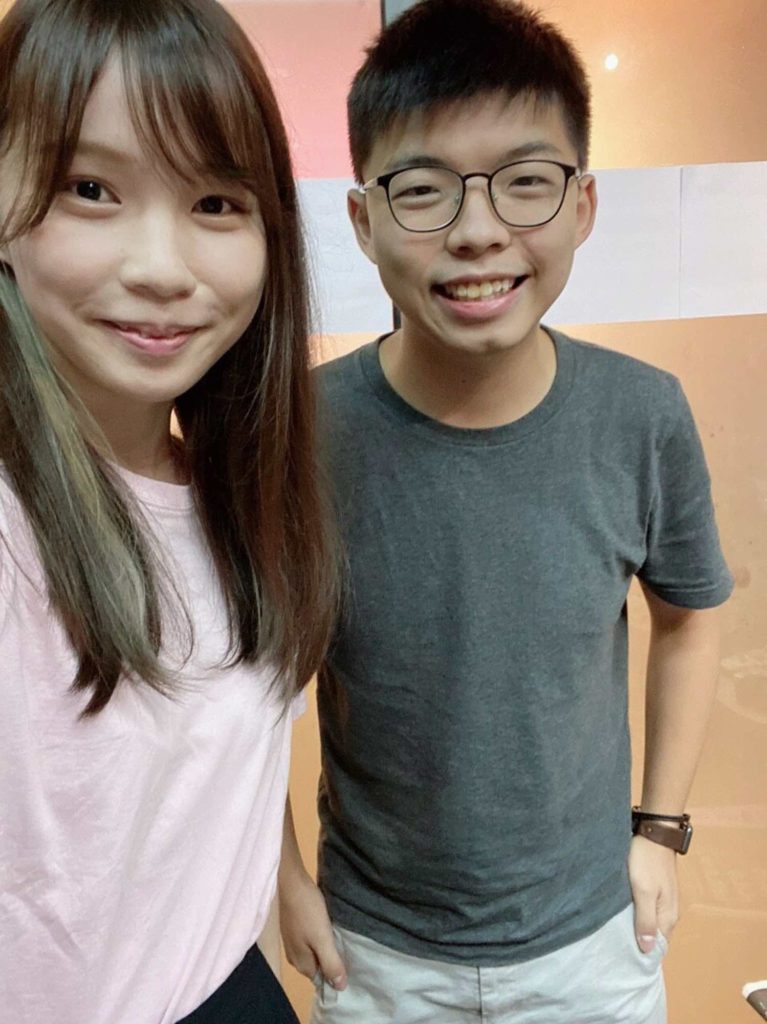 When worse comes to worst

To you, what does the worst-case scenario look like?

’To wake up at 5am with the police at your doorstep. The National Security Department is here, arrests and detains you immediately for the offence of secession. That would be the worst scenario.’

Wong points out there were instances of people being ‘extradited’ to China even before the National Security Law came into play.

‘It can’t be that hard to snatch and “carry you off” to China. All it takes to shove you into a 7-seater is a few guys, and in an hour you’re already on the other side of the border.’ It is just not possible to mentally prepare for scenarios like this. ‘If you say I’ll be in custody tomorrow to serve 5 years in jail, this is something we can never be prepared well for.』

Wong and Chow often stress how taking part in politics does not mean sacrificing their own futures, nor do they consider themselves the “chosen ones” of our time; it is all a matter of choice. ‘It’s not like many of our 20-somethings have great plans in life anyway. Most fresh graduates just want a job. Getting involved in politics comes with a lot of uncertainty, so we tend not to think (about sacrifices).’ Makes a ton of sense, no?

Is your family worried? ’They are,’ without doubt. Would you sometimes feel emotional? ‘If I do, I wouldn’t show it.’ Coming from someone at the grand old age of 24.

Concerns aside, Joshua Wong is not leaving Hong Kong anytime soon because of his pending cases, and the bail conditions do not allow it anyway. ‘From late June to early July, a lot of people left comments urging me to leave. They convinced themselves that getting out of Hong Kong by boat was not all that hard. Now I’m sure no one would say that anymore.’ People suggested he enter the consulate, board a warship and then hop on a chopper – plots that would make Hollywood proud. ’They thought I was in command of land, air and sea or something. Just surreal and not very logical.』

Wong has remained level-headed and impartial despite the passionate and caring reception he enjoys from some of his supporters. 『For us leaving is not an option. And if they are just seeking to redeem their own sense of guilt, will they feel pleased if we do manage to go? What would we have left if everyone’s gone? What matters is what we do if we leave – how we can still contribute to the civil society. If we’re going to do nothing, we won’t be doing (the social movement) any justice.』 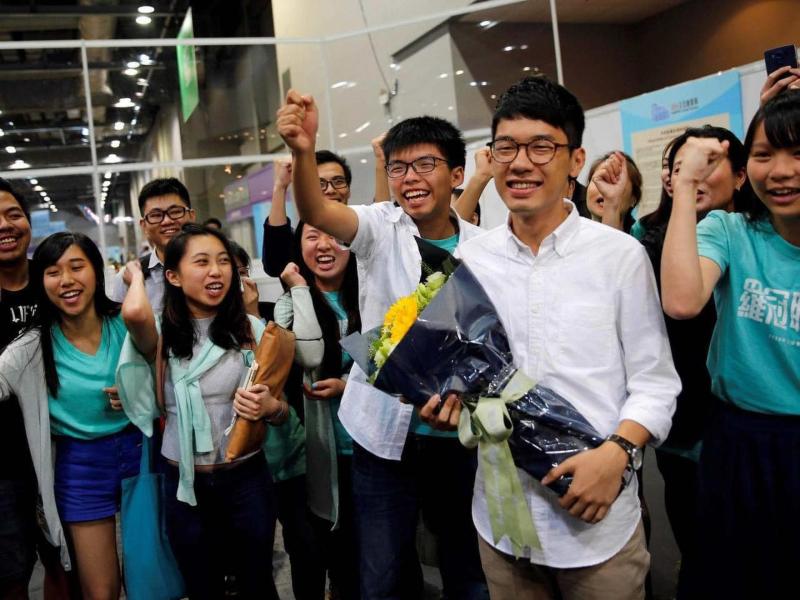 National Security Law Not an Endgame

As the state of politics threatens to engulf Hong Kong, its confused people are looking to commentators for advice. ‘You can watch a bunch of YouTube clips saying how Xi Jinping will be ousted in 6 months, or how the world would annihilate China. But expectation is never the same as reality. Instead of contemplating our fortunes tomorrow, we should really ask ourselves what we can do.’ We can 『write letters, attend (court) hearings, support the Yellow Economy, support our District Councillors, and sign petitions. The National Security Law might have been passed, but is there nothing we can do? If you will, there’s s
till so much we can do.』

Wong sees no need to blow the National Security Law out of proportion, or consider it some sort of endgame. ‘Hong Kong had not entirely been at peace before the law anyway, nor were it over the moment the law was passed. At least I’m still here (taking this interview).’ Not being able to enter the legislature does not imply inaction. ‘Do you keep tabs or lend a hand to people subject to persistent oppression in society, or even mobilize public action? This could be done whether you have votes or not.』

Logical thinking has always been a strong suit for Wong. ‘Many people lost their goal because there’s no (Legislative Council) election anymore. But if you are clear about your goals and what you want to do, it doesn’t matter whether we have elections. They are just a bonus. At this point in time, if you say we can’t do anything without a place in the legislature, I would say “there is still so much we should and can do, even if we no longer have seats.」『

’Some examples are prisoners’ rights, the 12 Hongkongers still being held in Yantian, Shenzhen, as well as the health code system and universal testing; Do we really need to secure seats before we can drive public interest and action? Here in Hong Kong, in the year 2020, my answer is “no”.』

If Agnes Chow is a cute, adorable presence who is tough on the inside, Joshua Wong is an eternal figure of calm. He might be behind Chow in popularity ratings, but still managed to secure over 30,000 votes in Kowloon East in the pro-democracy LegCo primaries in July. He is heartened by the level of support shown to him.

‘In 2012, people brought drinks to our campaign kiosks on the streets, and soon started delivering cakes, pizzas and sushi too; In 2014 the marches and fundraisers saw great turnouts too. More recently, the campaign to send letters (to the 12 detained Hongkongers in China) was very well-received. Amazing scenes.』

Wong describes the current level of public engagement as ’swarming’. ’The support they offer is very solid, and the foundations are there in our society.” He has great faith in the Hong Kong people. ’So long as they can speak up and do something, they will.’ 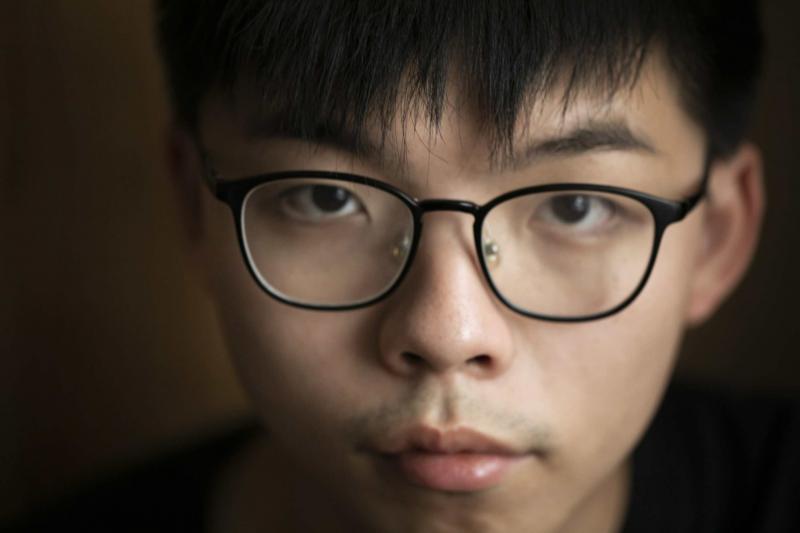 He’s always looking to carry the weight on Hong Kong on his shoulders.

Blessed with affectionate support from older generations and ‘aunties’, Wong does not let sentiment get to him. ’There are a lot more people out there who deserve such care. My role is to offer support and encouragement to protestors who aren’t getting enough attention.』